Journey To Motherhood – The Birth

Journey To Motherhood – The Birth

In the Shona culture, after marriage and towards the third trimester of the first pregnancy they do what they call “masungiro” which basically is when your husband and his family officially take you back to your parents’ (or relative’s) house to be looked after and be taught how to be a new mother once the baby comes. How long you stay differs from family to family, but most families do still observe this tradition. (How I wish they did this for every child, I guess tradition thought once is experience enough.) My “masungiro” was done in August of 2019 and was not very eventful besides the sickness which I was now accustomed to.

So here I was 40 weeks pregnant (read about my pregnancy journey here) and a week past my due date. My aunt, who I was staying with at the time, calls me and goes on to tell me that she thinks there is something wrong with my baby. I wasn’t ready to be told this, being a first time expecting mom and all. She went on to explain that I should be having regular bathroom visits and not sleeping comfortably as I was. This period had been one with some of the most comfortable sleep I had had the whole duration of the pregnancy. In a panic, I called my husband and asked him to take me to the closest clinic which happened to be closed because it was a weekend. We ended up going to a private doctor, who only confirmed my aunt’s suspicions – my child was breeched (Breeched presentation is when the baby’s legs and bum are toward the birth canal instead of the baby’s head in preparation for birth).

We then decided to go to my maternity clinic. The clinic then referred us to the hospital as they did not do what they termed “complicated births”. The hospital told us to come back on Monday because the doctors had to evaluate me first. Monday comes and off to the hospital I go.  By 5am I was there waiting to be attended to, only to be told at around 12pm that the ultrasound scan machine was not working. So they booked me another appointment date for the following Monday. That Monday comes to and I am now 41 weeks pregnant and I look like a lady with a luggage bag. My stomach was huge! After getting to the hospital, surprise, surprise baby has turned and there was no need to worry. I was so glad to be going home (I hate hospitals). That was when the doctor announced that I would not be going home, I was long over due and they had to try and induce me. Baby had to come out! With the way she said it, I thought whatever needed to happen was going to happen soon. The health system had other plans.

Three days later and I had not been induced and I was getting really close to week 42 which I believe is a dangerous territory. It was on the Wednesday that they decided to give me the medication. First dose early morning did nothing for me. Second dose was in the afternoon, still nothing. It was the evening dose that decided to do something. I have never experienced pain like that! I could not move. Every bit of movement was torture to my back, especially around the waist area. To this day, I can not put into words what I felt, I just know it was a different kind of pain (I salute all the ladies the natural way – as this wasn’t even close but I felt it).

This last dose also decided to do something else, it sent my baby into distress. The ECG machine was showing two heartbeats, and they were beating too fast. The nurses even asked if I was having twins, when I said no they had the nerve to tell me I was messing with the machine. So they changed it and used another until they could not deny what was going on. A doctor was summoned to come and check on me. My case was “peculiar”. In the early hours of Thursday morning the doctor made his decision. I was to be booked for an emergency C-Section. But Thursday came and went, so did Friday. No C-Section. No knowledge of the baby’s condition other than that she still had a heart beat. It was on Saturday that I decided to make a nuisance of myself.  It was now official week 42 and 1 day and I wanted to get my baby delivered. I wanted to go home. And deep down I was praying my baby was ok. I had been told not to eat on Friday because my C- section could be anytime so first order of business was to eat because hey I was still here a whole 5 days after admission with no knowledge of when this delivery would happen.

I then made it my mission to keep reminding the nurses that I had a booked C-Section and that my baby was in distress. It was after 10pm that night when I was finally called. The doctors were tired, they had back to back operations and did not want to go on but after a lengthy discussion with the Sister in Charge of the Maternity Dept, I was finally going to get my operation. I was awake for the whole thing (with a spinal local anaesthetic of course). It was during this procedure that I heard one of the doctors say, “this baby was in distress because the umbilical cord was around her neck and choking her”. You can imagine my shock! My baby could have been strangled to death by her own umbilical cord. After what felt like a few minutes, I heard the cries. They asked me to take a look at my child and confirm the gender. She looked just like her dad. I felt so weird afterwards, my stomach felt so loose and empty. My baby was in the world.

I was never ready for the chill I felt after. I was shaking like I was in the middle of a snow blizzard. They say if you consume icy foods while pregnant this bound to happen. I can not argue otherwise because it happened to me too! 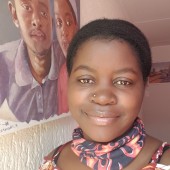 You are a strong woman