“Why are you doing this to yourself? Wouldn’t something more feminine be more appropriate for you?”

If I got a penny every time I heard these words since the start of my Electrical Engineering degree, I would be a millionaire!

“Oh! So you are one of those smart girls? And you also defend women rights?!”

These comments make me sick and mad that I cannot even grant them an answer. As you can already tell, I am writing this mad too. Believe it or not, most of these comments come from some of the most “educated” men I know. That is why today, I am questioning what the education system stands for, if it keeps producing more sexists and sometimes just blunt misogynists. For those who don’t know what these two words mean, why don’t we return to our dictionaries and differentiate these two terms.

Sexism is an action based on the belief that the members of one sex are less intelligent, able, skilful, et cetera than the members of the other sex, especially that women are less able than men. And misogyny is the feelings of hating women or the belief that men are much better than women. From the above definitions, we would easily call my commentators sexists. Some of them are fellow colleagues who don’t like sharing their workspace with women. The kind to only hire you to fill in the required female number, but genuinely don’t think you earned it.

Looking back to our bitter term misogyny, we can see that these fellas believe they are better than women just by the mere fact that they are men. But by taking a closer look, I would say these men do not think they are better, instead, they are trying to enforce the patriarchal social structure that was put in place to block women from achieving their full potential. Sexism is an ideology but misogyny enforces it. There are relatively few misogynists as bold. Partly because misogynists often think they are taking the moral high ground by preserving a status quo that feels right to them. They want to be socially and morally superior to the women they target.

I think most misogynistic behaviour is about hostility towards women who violate patriarchal norms and expectations. So there is a sense that women are doing something wrong: that they are morally objectionable or have a bad attitude or too pushy. But women only appear that way because they are expected to be otherwise, to be passive and always stand in vulnerability. In today’s world, misogyny is used as the law enforcement branch of patriarchy. When people are attached to positions they believe are their birthright, you get huge amounts of backlash. When men think women are taking opportunities and privileges away from them, when they think women are challenging male dominance, you get backlash. But we have to deal with that in a more head-on manner. Women cannot and should not internalize patriarchal values and keep giving until they are nothing. 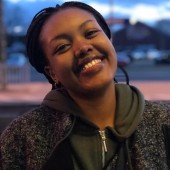