Home - Current Affairs - Who is Failing Whom? Africa, or Its Women?

Who is Failing Whom? Africa, or Its Women?

Who is Failing Whom? Africa, or Its Women?

If you ask me to name one of the most compelling developments in the politics of African countries lately, I’ll tell you it’s the engagement of women in politics.

A few days ago, I stumbled upon an article that talked about a pledge made by Kenya’s President, Uhuru Kenyatta, towards the empowerment of children and women. He promised to address opportunities for women to get in positions of power, end female genital mutilation (FGM), and provide education for all children across the country. A pledge like this one should be heard across Africa.

For years now, Rwanda has been making the news, in regards to its efforts on gender equality and women’s involvement in politics. With 64 percent, Rwanda tops the list of countries in the world where women hold the majority of seats in parliament. One can be confident to say that, this is the best time there has ever been to be a female in Rwanda. As a Rwandan myself, I am immensely proud of my country leading the way for others. Mama Africa must be proud of such moments too, because celebrating strides made by women, is in itself a form of empowerment, and plays a part in nation building. It is also important at this time to note that in 2006, for the first time, Africa received its first elected female President in Ellen Johnson Sirleaf of Liberia, and 2012 we also saw Joyce Banda come in as President of Malawi.

Unfortunately I can not say that the rest of Africa shares the above good story. Today, a number of African countries are still finding the empowerment of women, a distant dream. The majority of countries in Africa have no women representatives in governments or boardrooms. For example, in Botswana, only 9.5 percent of the government positions are held by women, while Mali and Central African Republic stand at 8.8 and 8.6 percent respectively. This is followed by Eswatini at 7.2 , Comoros at 6.1, while Nigeria takes the rear end, with only 6 percent.

It is my strong belief, that the engagement of women in issues that matter to their country is the best that particular country can ever do to benefit its people. This is because, the more women in positions of power, the more inclusively informed decisions are, not forgetting to mention the vibrancy. However, expecting things to change by having women sit back and rely on governments to deliver, is totally unrealistic. As African women, we ought to play our role too. Let’s stand up to be counted, let’s speak about issues that matter, let’s campaign and take responsibility. Let’s take the lead in our nations’ development. At the end of the day, the issues are ours, and ours alone and so we should care. 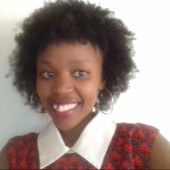